Washington Ponders How to Reshape the Mortgage Market

Washington is finally talking seriously about how to replace Fannie Mae FNMA +1.53%and Freddie Mac, FMCC +1.59%the mortgage-finance juggernauts that the government was forced to rescue five years ago. Just don't expect quick action.

The firms are proving to be as difficult to shut down as the U.S.-operated Guantanamo Bay prison in Cuba. Republicans and Democrats are deeply divided over what to do. On the surface, the disagreements concern what role the government should play in the mortgage market.

But the real debate boils down to this: Should all Americans continue to have relatively easy access to the pre-payable, 30-year, fixed-rate mortgage? 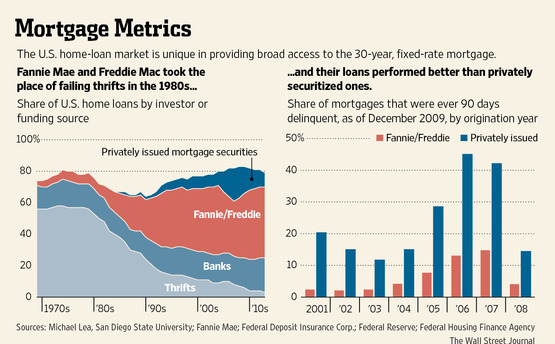 American homeowners love the 30-year mortgage, which isn't available in most other countries. It provides payments that are stable for the life of the loan, which makes finances easier to manage. In many other countries, homes are financed with adjustable-rate mortgages, where payments rise and fall with prevailing interest rates. 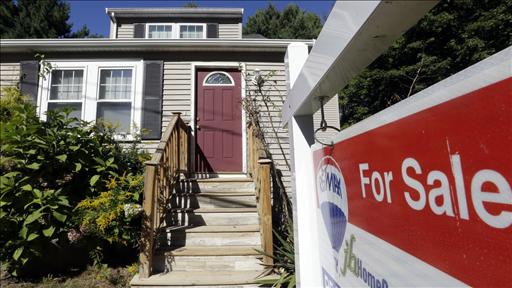 The real housing debate boils down to this: Should all Americans continue to have relatively easy access to the pre-payable, 30-year, fixed-rate mortgage? Nick Timiraos reports. Photo: AP.

The government plays an unusually large role in the U.S. mortgage market because banks don't like holding 30-year mortgages. During the 1980s, many savings-and-loan associations failed when rates jumped because the interest they had to pay to depositors soared above the payments they received on those 30-year mortgages. This is known as "interest-rate risk."

Enter Fannie and Freddie. They don't make loans. Instead, they buy them from lenders, package them into securities, and sell those to investors. They promise to make investors whole when mortgages default. In other words, they take the credit risk.

This middleman role is important. It matches banks with pension funds and other investors that are more willing to take on the interest-rate risk. The companies also set uniform standards that facilitated very liquid securities markets. The 30-year mortgage is available mainly because of government guarantees—implied before the crisis and explicit since 2008.

Those who want the government out of the mortgage business say the 30-year fixed isn't all it's cracked up to be. Because borrowers pay a lot of interest during the first few years of the loan, it's hard to quickly build equity. This makes the loan less practical in an era where people move, switch jobs, and get divorced more often than in the past.

Defenders, however, say it's the wrong time to push more people into adjustable-rate loans because interest rates are likely to rise over the coming decade.

Wouldn't banks still offer the 30-year fixed mortgage without a government guarantee if it's so popular? Maybe, but they would likely require bigger down payments and higher rates.

It's a math issue. There is nearly $10 trillion in mortgage debt outstanding today with around $4.5 trillion backed by Fannie and Freddie. Scrapping the government's role means finding trillions of dollars ready to absorb the credit and interest-rate risk for new mortgages, since the firms have backed around two-thirds of those made since 2009.

First, private capital had a lousy track record during the bubble. Loans securitized without government backing performed worse than Fannie's or Freddie's, largely because investors relied too heavily on triple-A ratings. Between 2006 and 2012, Fannie, Freddie, and federal agencies suffered $206 billion in mortgage losses, or around 3.9% of all loans they guaranteed, according to data from Moody's Analytics. Privately issued securities, by contrast, faced $449 billion in losses, or 20% of all loans.

Second, a mostly private market could further concentrate lending in the largest banks—exacerbating the "too big to fail" problem. In 2008, the top five banks in Canada, the U.K. and Australia, for example, funded more than half of all mortgages. During the crisis, many European banks were viewed as implicitly guaranteed by the government. In the U.S., pushing more mortgages into federally insured banks also doesn't get the government off the hook, a lesson already learned during the S&L crises of the 1980s.

Third, private capital takes on more risk in good times but exits quickly at the first sign of trouble. This tends to magnify the boom-and-bust nature of real estate. Downturns are worse because credit is hardest to find when it's most needed.

During the bank runs of the Great Depression, panicked depositors pulled their money from banks, afraid that the institutions wouldn't survive. In 2007, the mortgage market faced its own series of runs as investors liquidated their mortgage bonds, unsure over the quality of loans backing their investments. Securitization markets are particularly vulnerable to runs because the first seller suffers the smallest loss.

Several overhaul proposals propose creating federal reinsurance for mortgage-backed securities. Any government guarantee would be explicit and paid for by investors, akin to deposit insurance provided by the Federal Deposit Insurance Corp.

Government insurance solves some problems while creating others. Chiefly, taxpayers could face losses if capital levels or fees are set too low for this new insurance.

Fannie and Freddie, which held far too little capital to withstand the downturn, had for years argued successfully that higher capital standards translated to more costly mortgages, meaning less homeownership. Today, some worry that the housing industry would eventually make similar arguments for lower fees.

No one said an overhaul would be easy. Ultimately, Washington will have to be honest about what it wants and what that will cost.

Write to Nick Timiraos at nick.timiraos@wsj.com

A version of this article appeared September 23, 2013, on page A2 in the U.S. edition of The Wall Street Journal, with the headline: Housing's Pillars Get Rethink.